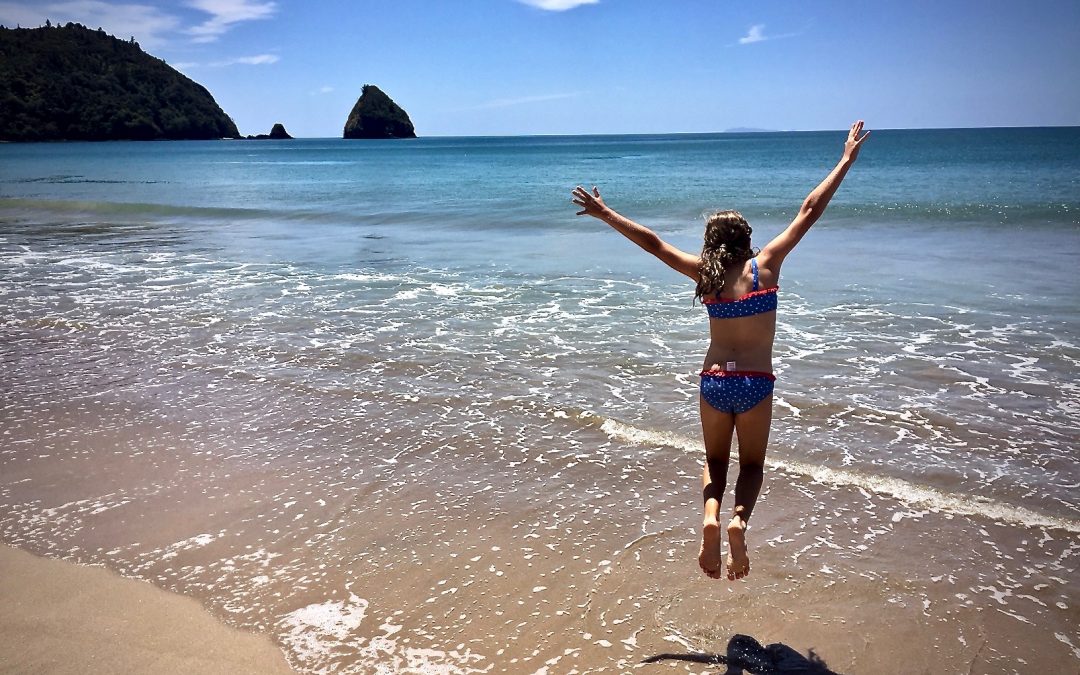 We open with a thank you

Recently Bookwagon celebrated two years in operation. We have made so many discoveries along the way.

As a special thank you for being aboard with us, special subscribers and loyal customers are offered a 15% discount on products, aside from those already on offer.  Enter the code AUG08 at the checkout. This offer is available until midnight August 12th.

A year ago we developed the Bookwagon site notably. Now, a second year in, we’re revising it anew to include extensions to our subscription programme and further information about services. We have learned so much about the mechanics of websites!

The children in your family, or those with whom you work, will be making discoveries this summer. When I taught, I felt children learned more in their ‘off task’ times than their structured lessons (discuss!)

Bruce Lee said, ‘Life itself is your teacher and you are in a constant state of learning.’ Time to make discoveries is rare in our scheduled lives; summer holidays suggests these possibilities. 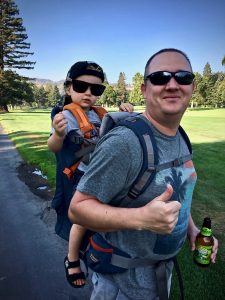 A lifetime of discoveries!

Aboard a giant killer jellyfish

Martha in Jelly makes discoveries beyond possibilities. She watches Petrified Pete attempt to escape the killer giant jellyfish upon which they and a post-apocalyptic community are captive. Consequently, she feels her need, and the potential to break away, grow. Is it possible to leave this Kraken that seems to sense the schemes of its inhabitants? What lies ashore, left broken by the travesty of humankind ignoring warnings of climate change and rising water levels? 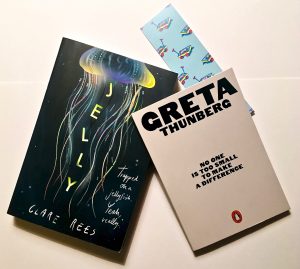 Jelly by Clare Rees, alongside No One is Too Small to Make a Difference by Greta Thunberg

Darwin (and some ovis aries)

Mr Bookwagon was awed when he read Darwin: An Exceptional Voyage. Although we know something of Charles Darwin’s discoveries, we know little of his life, research, duration of his voyages, nor his extreme youth when he began his exploration.

Brenda is making culinary discoveries. Mint flavoured sauces are brewing. It seems like Brenda is preparing a thank you for the warmth of her welcome into the sheep community. She’s taught them archery, though attempts at tag have gone awry. Brenda is a Sheep, though a taller sheep than the others, with sharper teeth and a knitted woollen jumper… 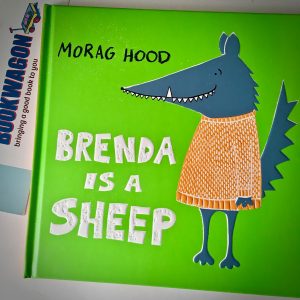 Brenda is a Sheep by Morag Hood

Ahead of kd lang’s appearance in concert, I chatted with my neighbour who’d returned from interviewing Michael Sheen about his Homeless World Football Cup. His charity inspires me. Thereafter, I thought of Joe, and the message within a seemingly simple picture book The Extraordinary Gardener by Sam Boughton. Joe sees beyond the sterile hopelessness of a grey world, seeking something exceptional, which he creates through one seed of hope and community. 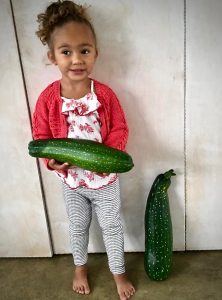 Seeds of hope, community and raspberries are sown in Freddie’s Amazing Bakery The Great Raspberry Mix-Up, Harriet Whitehorn’s introduction to a new early chapter book series. I love her deft characterisation and the creativity and charity evident in her lead character. What would he make with a new, improved cooker?

Miranda has never baked despite her recipe collection. Baking is but one of the activity she’d love to try with her mother. Yet her mother avoids any prospect of being close with Miranda. Moreover she rejects all opportunities to share her childhood, or support Miranda through her fears, including a paranoia about water. What discoveries might Miranda make when circumstances mean she must stay at her mother’s childhood home of August Island in The Secret Summer? 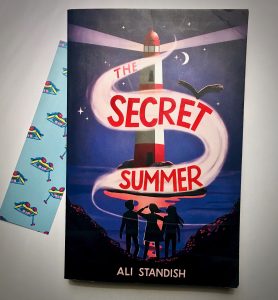 The Secret Summer by Ali Standish

From the familiar to the new in early chapter books

Bookwagon has worked determinedly to extend our range of superior early chapter books. We are overjoyed when sequels to much loved series appear, we are overjoyed. Recently, we have welcomed Hotel Flamingo Holiday Heatwave, Pigsticks and Harold and the Tuptown Thief, Rabbit & Bear: A Bite in the Night and King Dave Royalty for Beginners. 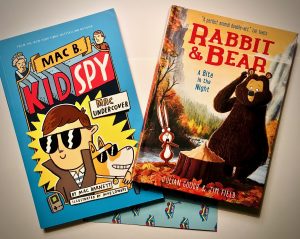 Mac B Kid Spy Mac Undercover, and Rabbit & Bear: A Bite in the Night

Alongside ‘Freddie’s Amazing Bakery The Great Raspberry Mix-Up’ we have introduced two new series. The first is another solo effort by one half of the acclaimed Barnett- Klassen writing partnership. Mac B. Kid Spy Mac Undercover sees the 1970’s Californian Game Boy- playing school boy take his first spy mission- for the Queen!

Lolo doesn’t have any missions. However she does have school, skipping, library books and twinkling pavement discoveries! We are delighted to discover Here Comes Lolo and Hooray for Lolo from South Africa. 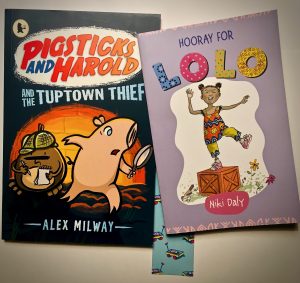 Pigsticks and Harold and the Tuptown Thief, and Hooray for Lolo

At the London Book Fair, Mr Bookwagon and I pledged to select only the best books relevant to the 50th anniversary of the moon landings, recently celebrated. We delighted upon Pop-up Moon, discovered at that event. Thereafter, we applauded the launch of a superb poetry collection by Brian Moses and James Carter, Spaced Out. Recently, I alighted upon the story of the seamstress charged with designing and making the first garments to be worn by the Apollo 11 crew, in The Spacesuit. 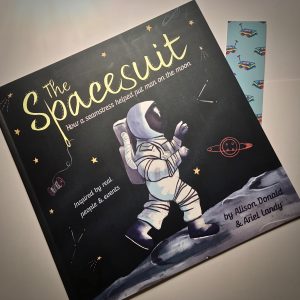 To infinity (with a book)

Bookwagon sells books we read and love only.  When I am surrounded by mountains of TBR books I find it hard to maintain that pledge. Yet they are laden with discoveries. Two titles read recently transported, moved and overwhelmed me, like the very best books do.

I was reluctant to read Toby Ibbotson’s The Unexpected Find, for the reason that his mother was Eva Ibbotson. What a mistake. From the moment the storm hits town, to its revelatory conclusion, it seemed as though this book held me in its grasp. This is a parable for all readers; wise, joyful and moving.

How can a ‘Grease’ loving, old English sheepdog fearing, bacon afficionado hope to mend his family? Carlie Sorosniak’s  I, Cosmo is an empathetic, funny, insightful, Sandy-fluffed story. It is glorious! 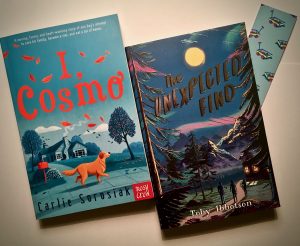 I, Cosmo, and The Unexpected Find

We hope you are making wonderful discoveries during your summer.

With our thanks, and warm reading wishes