Oliver Jeffers is orange juice with the taste and vigour

‘How to Catch a Star’ seems 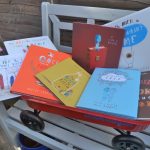 to have always been in every home and library. I don’t remember how I came to it, nor its successors,’Lost and Found’ ‘Up and Down’ or ‘The Way Back Home’-the ‘Once There Was a Boy’ series (Harper Collins Children’s Books). Somehow, Oliver Jeffers is orange juice with taste and vigour. Essential and ubiquitous.

Yet, its writer, Belfast born, Brooklyn resident Oliver Jeffers, had this title taken from a Harper Collins slush pile. He had barely graduated from the University of Ulster and had neither agent nor backer. It is a Lana Turner milkshake bar sort of story.

Today, Oliver Jeffers is one of the world’s most successful picture book makers. His best known title, in collaboration with writer Drew Daywait, is The Day the Crayons Quit. At last count, it had been resident on the New York Times best seller list for more than 178 weeks! Like ‘How to Catch a Star’, this title seems to be a feature of every reading establishment. I wonder how many of you have been urged to ‘Read the peach page!’ more than once…..  ‘When the Crayons Came Back’ is its sequel. This title was in constant demand at my last school!

Oliver Jeffers has branched out beyond picture books, but then his picture books branch out beyond picture books. A friend called to tell me she had discovered a ‘great picture book’ she was certain was not a children’s book. It is  A Child of Books, written by Oliver Jeffers and Sam Winston. Sheila is right. It is a collector’s piece, one to give, keep and savour. It is unique in its treatment of letters, words and pictures, a paean to literacy and imaginative possibility. The girl in the story floats on pages from classic stories on every page. It demands to be read indulgently…. ‘and upon my imagination, I float.’

That’s what I love about Oliver Jeffers. There is no end to his possibilities, to the curiosity he provokes in his readers, and the evident curiosity in his interpretation of any subject. I stumbled on the Hueys, a favourite of his titles. On a restaurant visit Oliver Jeffers drew the mass of customers idly. He interpreted them as eggs.

Each title in the series- The Hueys in None the Number,  The Hueys in The New Jumper  and The Hueys in It Wasn’t Me hints at a philosophical and scientific conundrum. I have had groups of children agog at the concepts suggested, who, after sharing one in the series, have demanded to revisit and discuss, day after day.

I have given The Heart and the Bottle to friends and children experiencing hard times. The interpretation of melancholy, of deep, shut down sadness, bites. The play of shadow and light, space and isolation is almost bruising.

Once Upon an Alphabet has been shared with family and friends who enjoy word play, and philosophical wonderings, as I do. A short story introduces each letter. We have ’V- Victor the Vanquished. Victor was used to being victorious. But recently he was defeated and retreated into hiding under the stairs, where he now sits, plotting his vengeance. One day they’ll all be very sorry.’ (What about that language?!)

Oliver Jeffers’ works have been exhibited internationally. At last count they could be seen in New York, Berlin, Dublin, London, Sydney, Washington DC and his native Belfast. He has won the Nestle’s Smarties Book Prize, the Blue Peter Book Award, the Irish Book Awards and the V &A Illustration Award, and was presented with the inaugural Hay Medal for outstanding work by the Hay Festival of Literature and Arts. His animated film of ‘Lost and Found’ won the best animation award for Channel 4 in the BAFTA awards of 2009.

Yet despite these, and many other, successes, his curiosity, his desire to draw parallels between arts and sciences, and expand beyond the notion that picture book making is ‘only picture book making’ remains. Currently, he is working on Project 4D glasses. He has initiated a range of his ‘collectibles’ based on his works, sales of which go to the International Rescue Committee. He is a co-founder of an arts’ collective, ‘OAR’- yardgallery.com. His own website is a joy to experience, oliver jeffers.com

Oliver Jeffers’ works confuse, provoke and nurture. I feel delight when I read them and share them. I hope you feel the same way.  Oliver Jeffers is orange juice. Bronnie