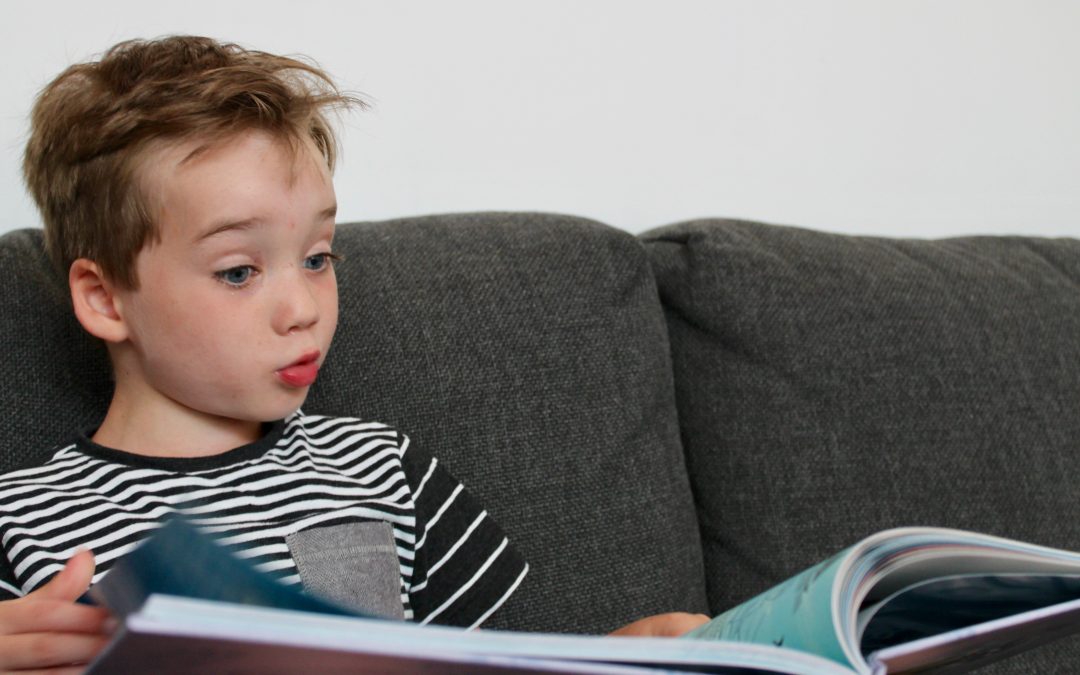 The new academic year has begun. Our days are shorter with a distinct chill in the early morning air. Bookwagon has been busy taking bookings for school events and popup sales. We are working to include a wonderful new selection of books aboard the wagon. Amongst these are some superb picture books. They are laden with picture book clues. 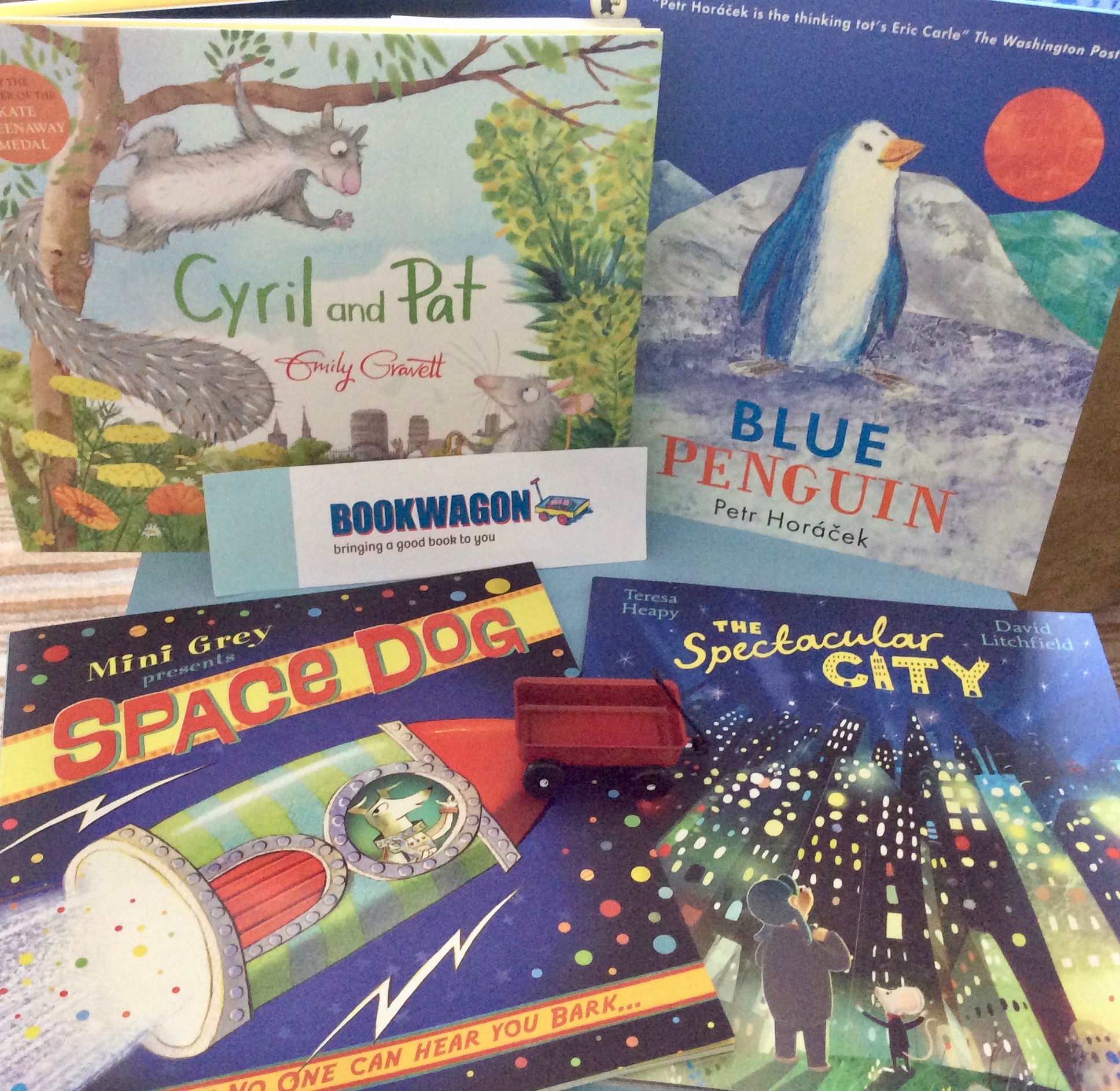 I have spent a lot of time encouraging children, teachers and parents to take more time to appreciate the wonder in picture books. There remains an impulse to see this genre as a stepping stone toward ‘reading properly’. Working through some favourites, I hope to show the magic at the picture book creator’s finger tips.

A friend introduced me to Morag Hood’s work, through her hilarious Colin and Lee Carrot and Pea. This début title won the UKLA’s 3-6 early reading catalogue.   I urge you to check this innovative, hilarious title out. 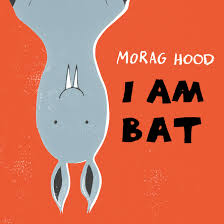 Recently, Bookwagon included Morag Hood’s I Am Bat on our site. It is a deceptively simple picture book that could be read in minutes. However, preparing this blog, I discovered further picture book clues!

Morag Hood uses a variation of bright yellow, bright green, bright blue and white backgrounds. Each colour supports meaning within every page of the story. Bat’s eyes are closed when we begin reading. He declares, ‘I AM BAT. I like CHERRIES.’ This is a statement of intent. The bright colours emphasise the meaning of the simple text. So does the bold, capitalised text. 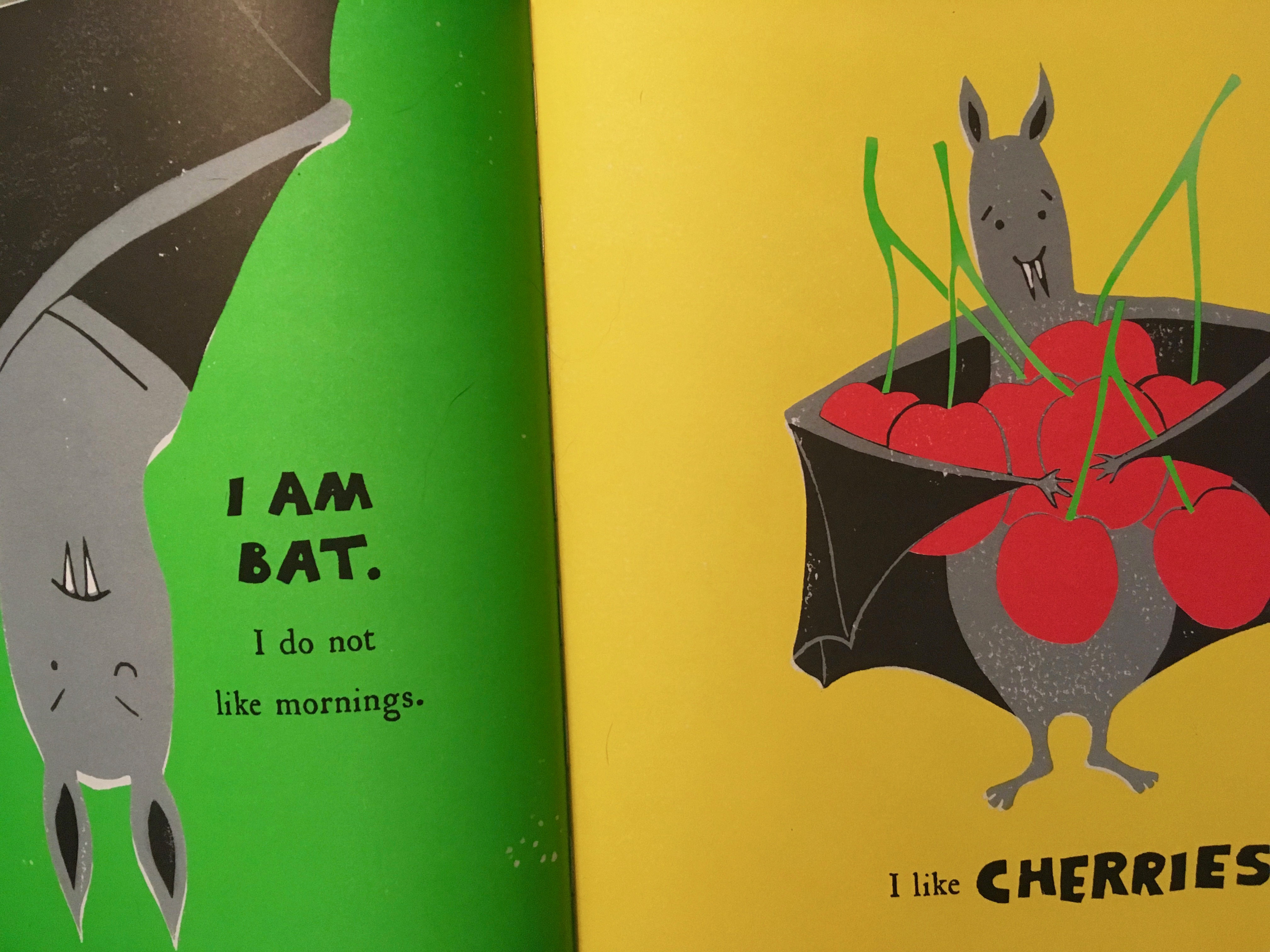 When Bat is describing the cherries, as ‘juicy’ and ‘red’ Morag Hood suggests his love of cherries by placing each adjective within a cherry image. The cherries are large and within a white background. The red and white are impactful. In pictures, including cinema, white offers an open ended, ‘forever’ impression. 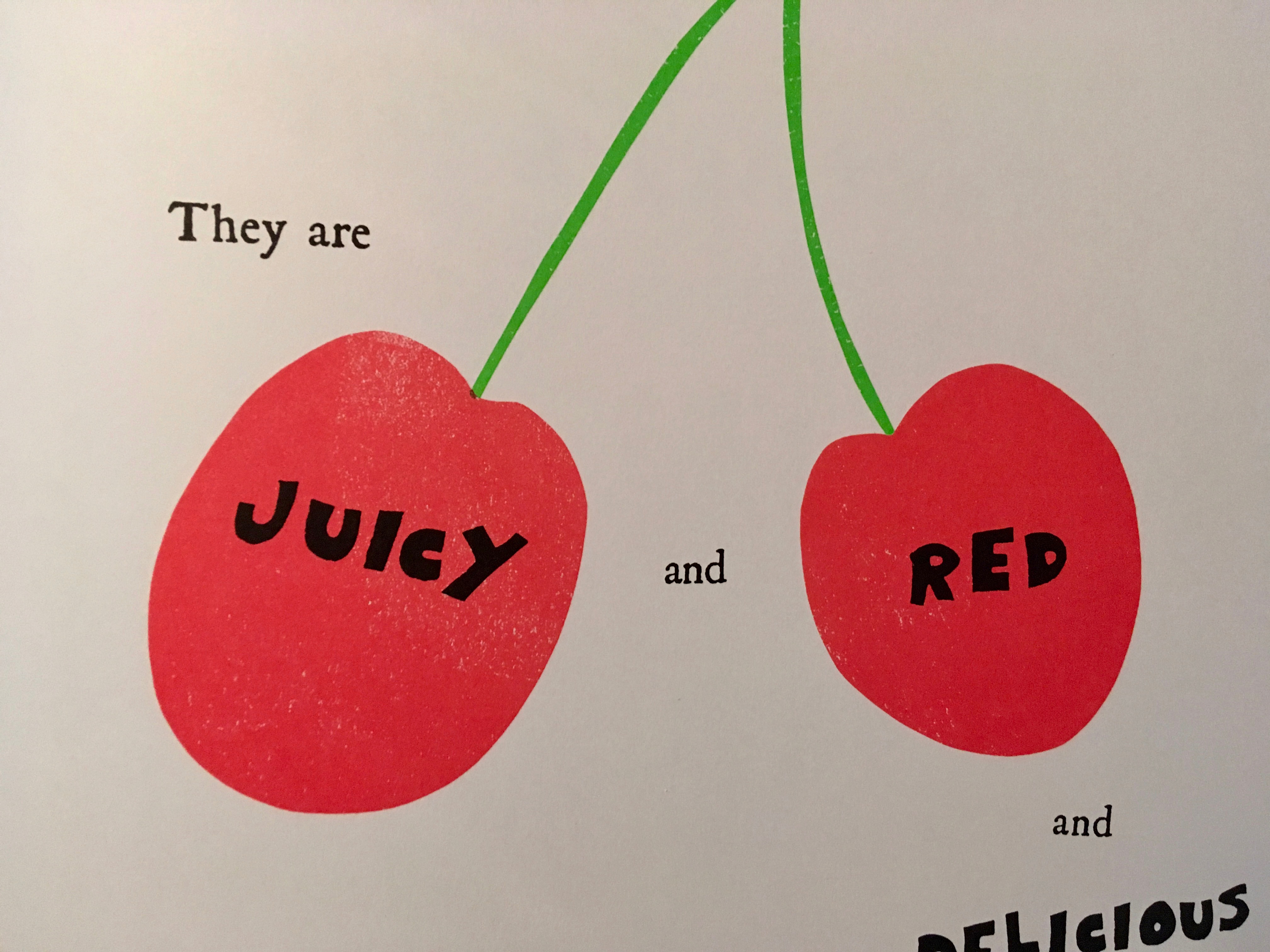 Quickly Bat recalls that he intends to be fierce and protective. He offers, ‘THEY ARE MINE. Do NOT take my cherries’. A bright yellow background supports his words.

Bat is portrayed, face on, open-mouthed with teeth bared, when he continues to warn us that he will be ANGRY and FEROCIOUS should his cherries be taken. The words are within bright red and green backgrounds for emphasis. 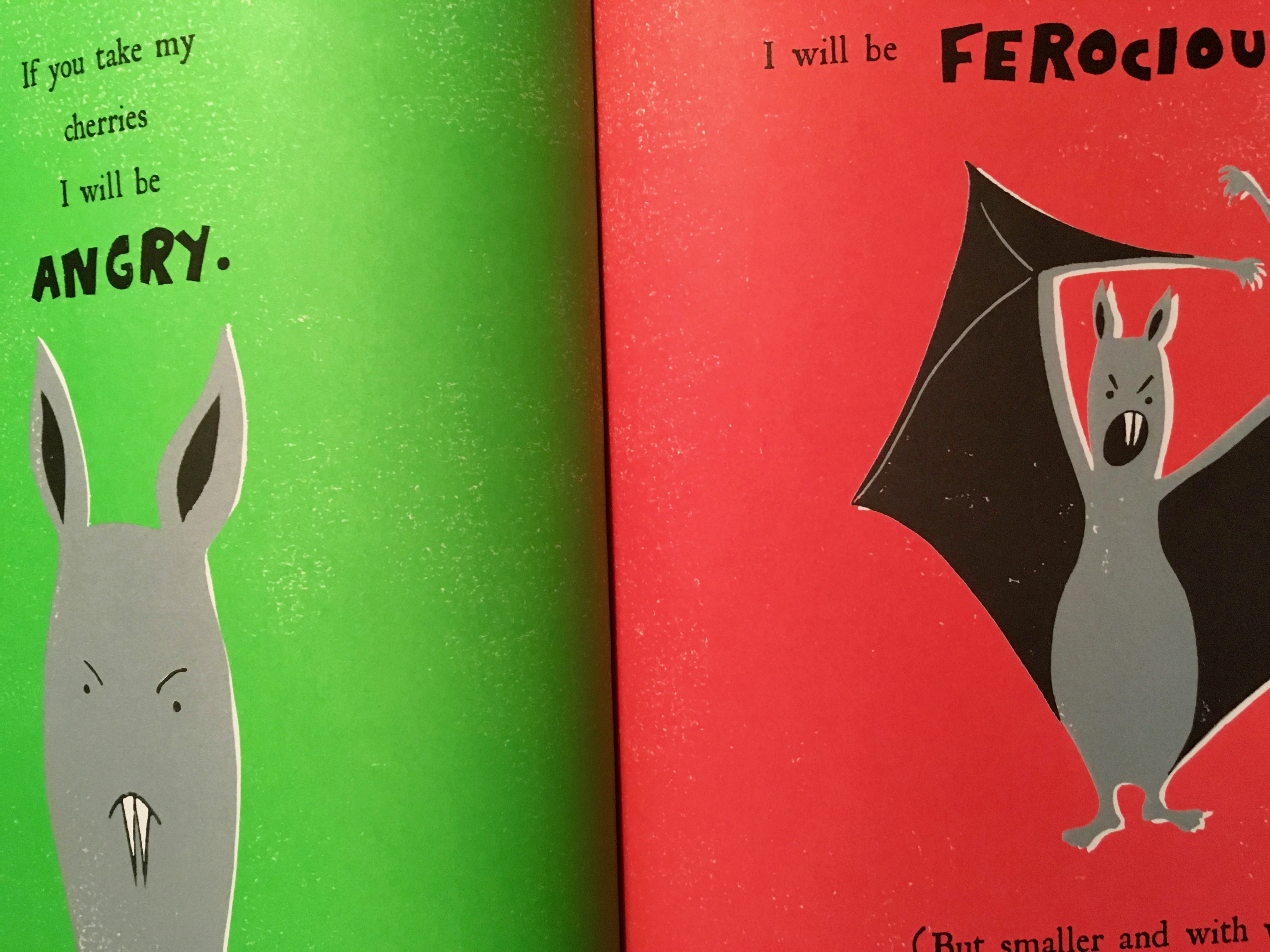 When Bat suggests, ‘I WILL KNOW IF YOU TAKE ONE’ careful picture book detectives might spy a sneak thief. A single yellow paw bearing cherries within boldly coloured backgrounds without text, creates drama.

The loss of the cherries diminishes Bat. His eyebrows point skyward, thus / \ Bat’s ears point forward. Suddenly the font is smaller, ‘Where did they go?’

Readers spot clues! Beyond the big yellow paw, there is a tiny frog leg reaching out, a goose bill peering down, ants marching off. Bat looks at us. He is accusing and unaware of what is happening behind him. Somehow, we are complicit, ‘Was it YOU?‘ We have a full face portrait of Bat, his eyebrows curved, angrily, ‘I will NEVER be happy again’. 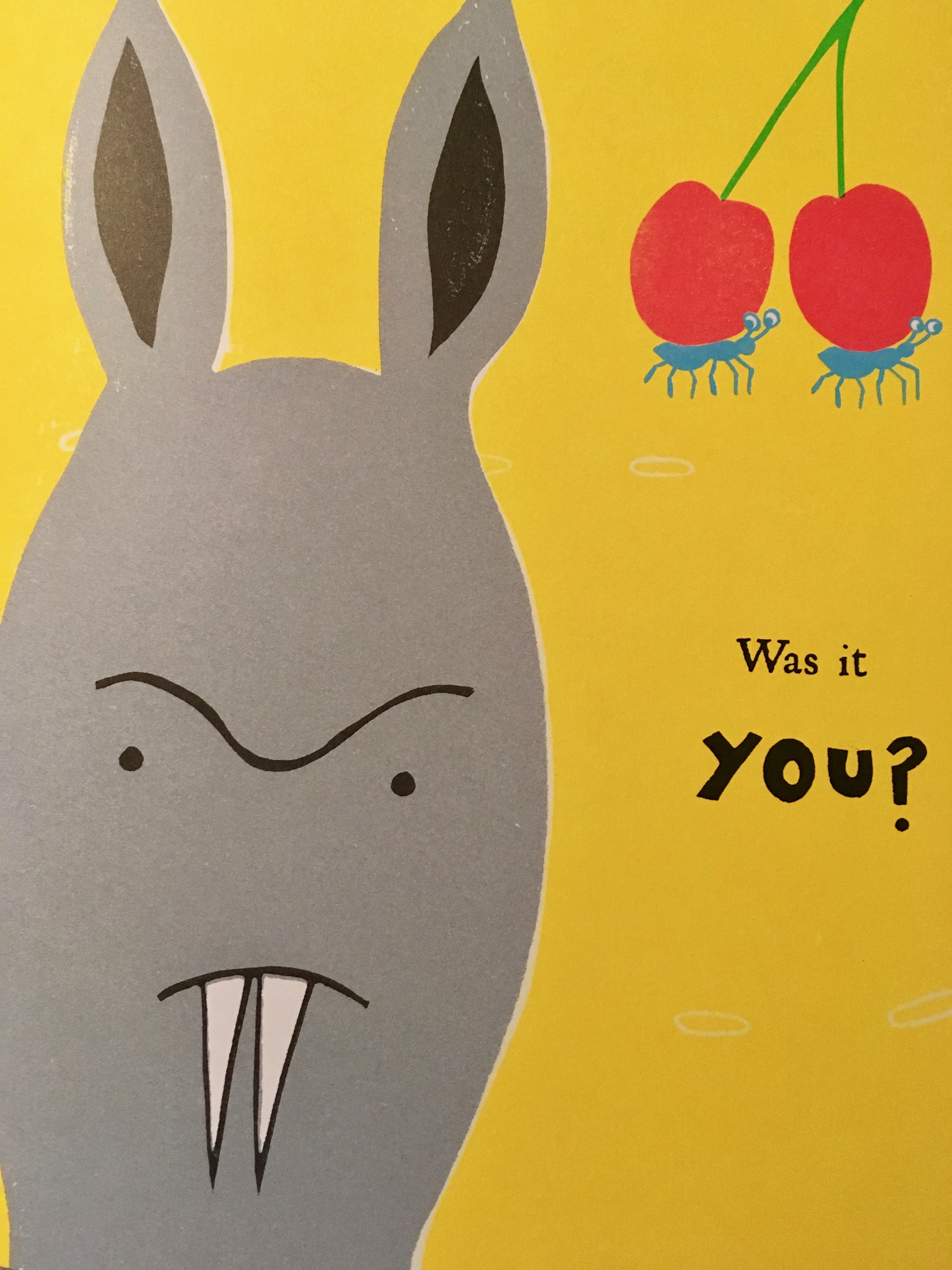 The culprits peer down at Bat from above him, offering a pear, ‘Ooh!’ How ears perk up. ‘A PEAR’ perfect, centrally focused within a white background.

There is less text, not because it is a picture book for younger readers. Each word carries greater meaning in a picture book. Font and style bear a responsibility of understanding. Frequently vocabulary beyond the child’s understanding is included. The context enables children to understand these words and often, employ them in their own communication.

Picture book text leads to opportunities for the child to ‘read’ through rereading, recalling and reciting. 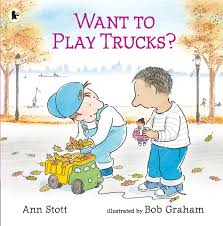 Bob Graham is one of my favourite picture book makers. This week we included Want to Play Trucks?, his collaboration with picture book designer, Ann Stott.

To the playground of negotiation

‘Jack and Alex meet almost every morning in the sandpit at the playground.‘ The scene is set, with autumn leaves, squirrels on the path, and a private conversation between the mothers/carers. 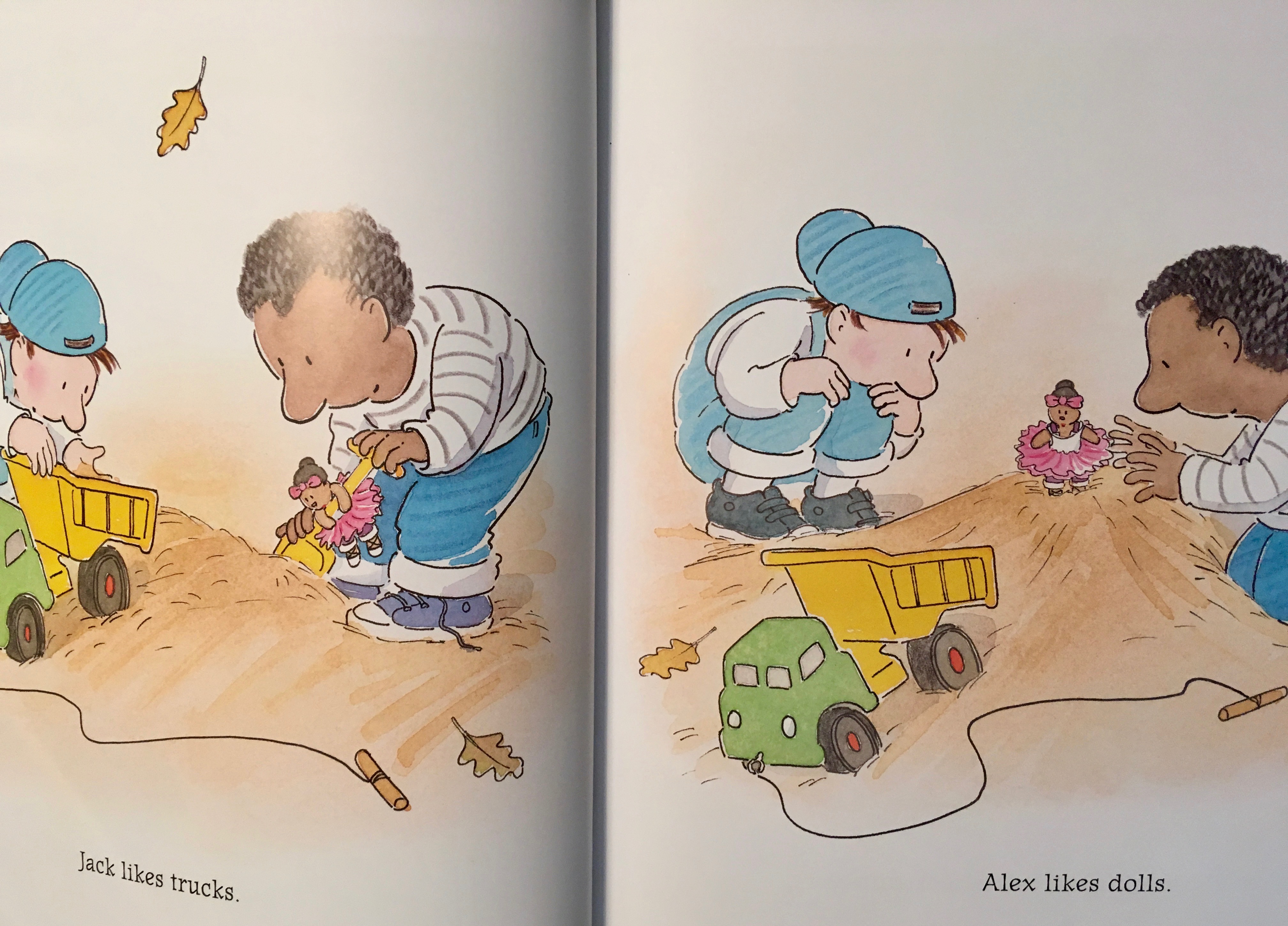 ‘Jack likes trucks. Alex likes dolls’. These are the big statements. We know this because the pair are shown in two sequenced pictures, the sole, close up focus within big white space. The two do not make eye contact. We ‘read’ the picture book clues, that there may be tension.

‘Let’s play dolls that drive trucks,’ suggests Alex. He watches Jack, who has his hands on his hips, his eyebrows raised. Then, Jack watches Alex balance his doll in the trucks, his hand on his hip, another on his forehead, holding back his frustration. 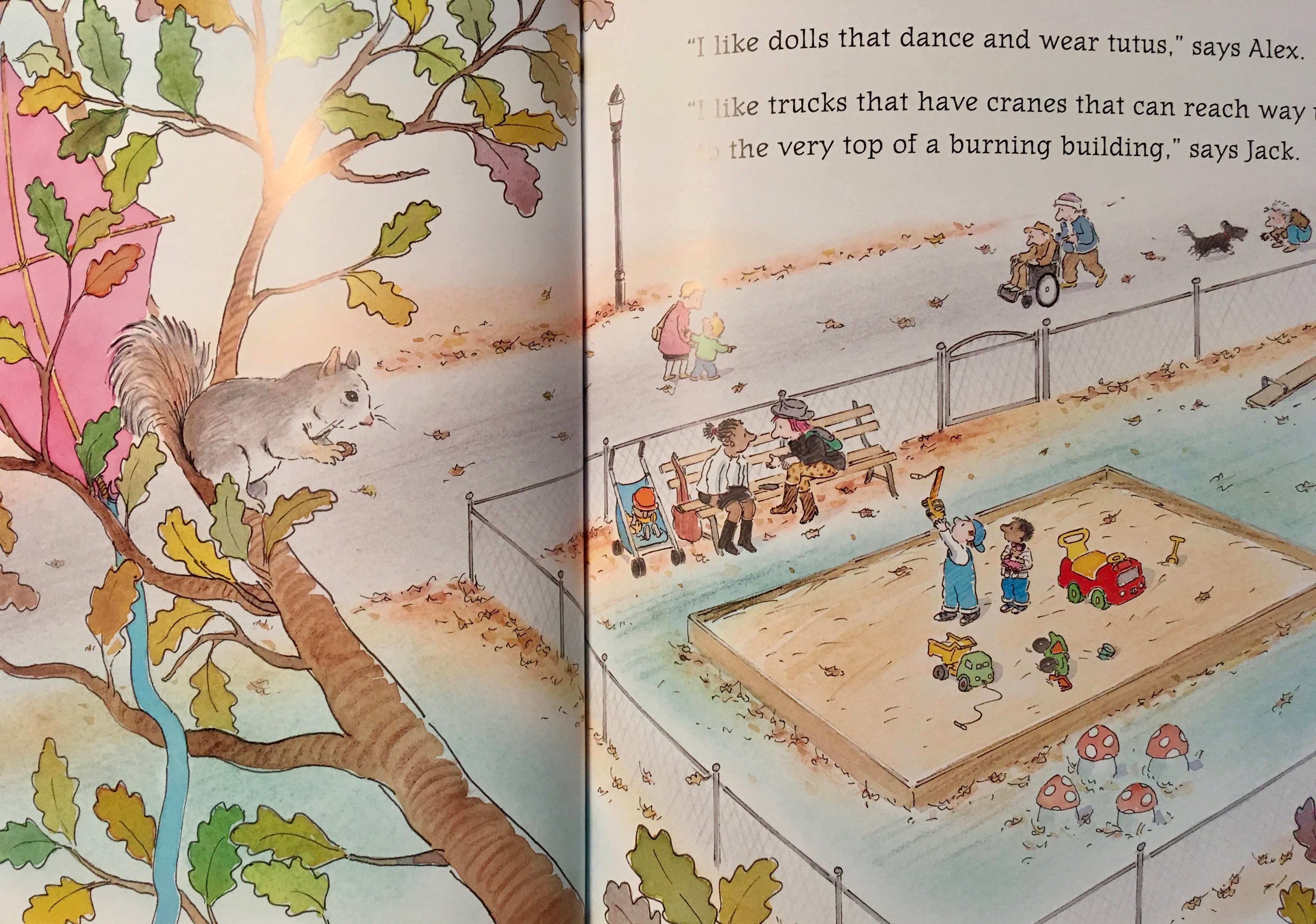 When they face off, the reader is granted a bird’s eye view of the sandpit scene, alongside the squirrels. Life continues around the area. Jack and Alex’s mothers/carers are engaged in an intense conversation. Passers by stroll on. Leaves flutter. The picture is a double-spread of interest. We are like voyeurs.

Jack uses more words, ‘I like trucks that have cranes that can reach way up to the very top of a burning building.’

As we read on, Alex is standing on tip-toes, giving himself a height advantage. ‘I like dolls that can do dips and twirls, sings Alex. ‘My doll can spin way up high in the cloud.’ This is no offering of a bigger explanation, but a feeling.

Jack’s aversion to playing dolls that drive trucks is stated, ‘You can’t wear a tutu and drive a crane’. By this time, Jack is on the ground. He’s making direct eye contact with Alex. He’s almost entreating him. 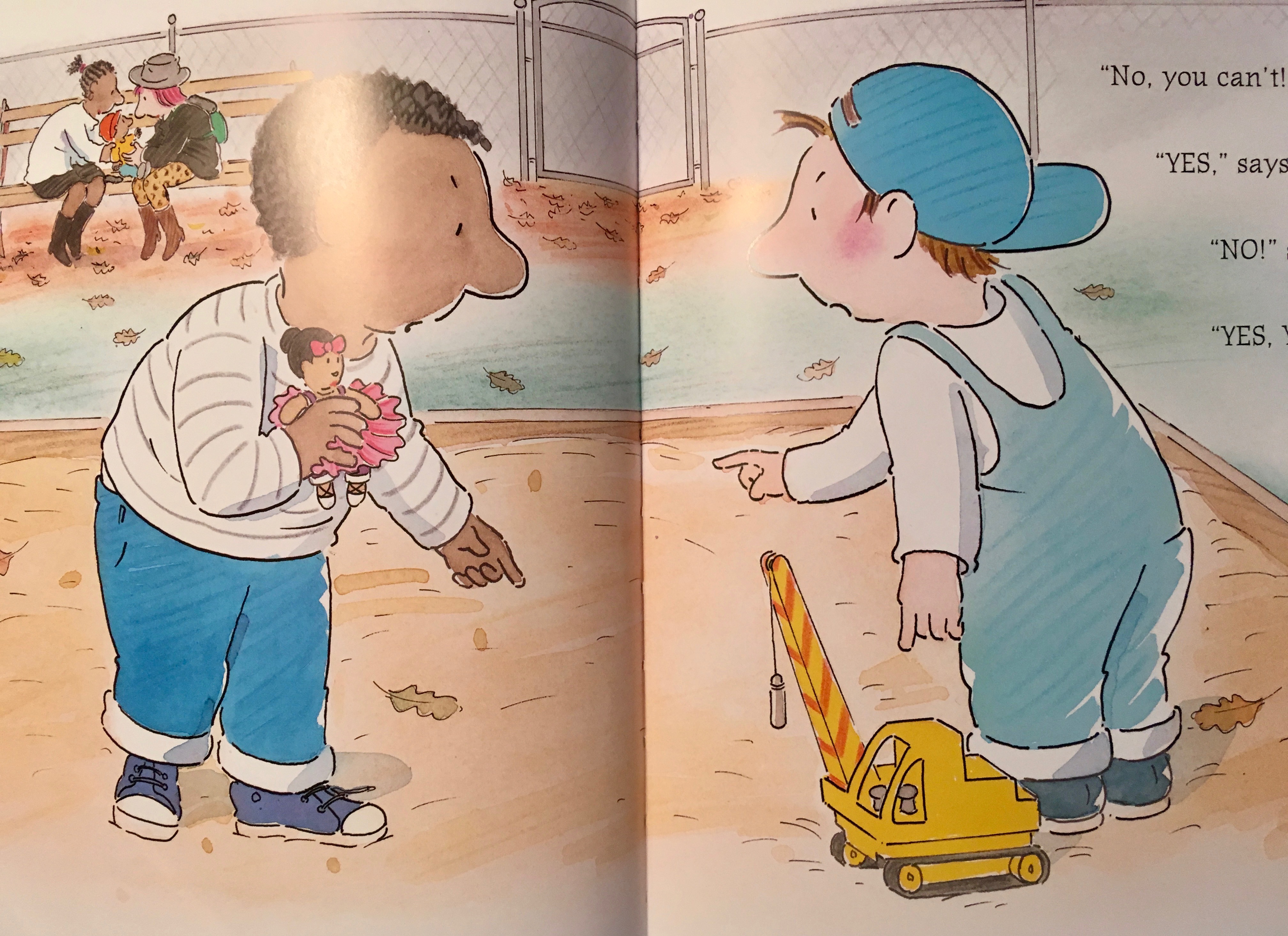 We watch their argument, ‘No’- insists/ ‘YES’- says/ ‘NO!’- shouts/ ‘YES YOU CAN!’- shouts’. Look at the text!  The declaration, the intensity, the certainty in the brevity! Look at the children’s raise eyebrow lines (like Bat’s!)

Reflected in the background is a similarly intense conversation. The parents/carers are completely absorbed in their communion, like the children. .

Like previous pages where the children declared their preferences, these two are in sequence of statement and response. The picture book clues make us focus entirely on the children.

We turn the page toward the dénouement. Jack is playing with big, overladen trucks, making appropriate noises. The mothers/ carers continue their conversation. There’s a far-off sound of an ice-cream truck. We know it’s far off because of the gentle text colour.

The story concludes with an image mirroring the introduction. It’s a broad landscape picture. The children, and relevant mother/carer, focus only on the other. Arms are outstretched in farewell. The leaves fall. The gentle tones and broad spectrum offer feelings of familiarity, trust and nostalgia. 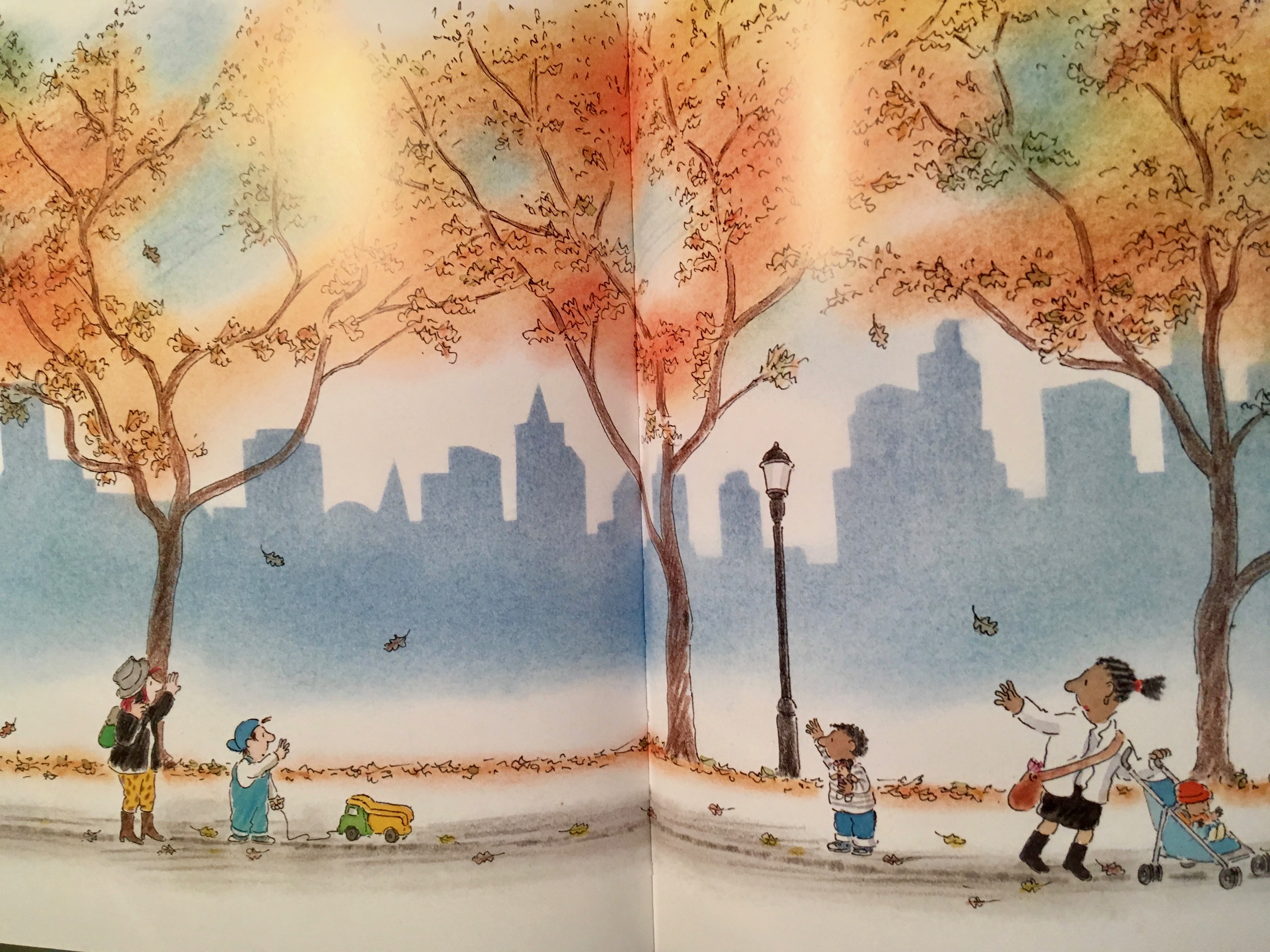 After the play is over

I wonder what has happened with Jack’s mother. When Alex’s mother/carer left to buy ice-cream, Jack’s mother held Alex’s sibling tightly. At the conclusion she is on the phone. The adults’ conversation has been private and constant throughout our story reading. What has been going on?

Further, Jack and Alex are gender neutral names. Does their gender matter? The story is greater than this. Their play and negotiation are our focus.

Further titles aboard Bookwagon by the two featured picture book magicians include When Grandad Was a Penguin, How the Sun Got to Coco’s House and Home in the Rain. Can you see the picture book clues used in these wonderful titles? 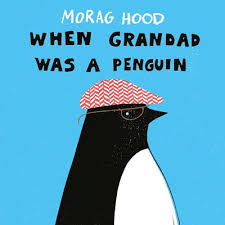 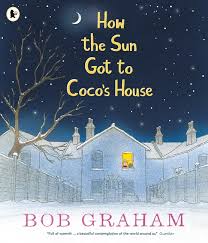 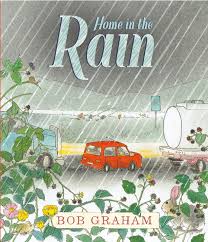 Curating our proud picture book selection is one of the reasons we formed Bookwagon. Picture books offer opportunity to ‘read’ unlike any other form of book. Picture book creators are magicians. France and North America appear to offer greater respect and time to picture books. Bookwagon seeks out works from these countries, and others.

Our picture books are separated into two categories; picture books and sophisticated picture books. The second group is a selection of titles more evidently for older readers and as likely to be enjoyed by adults. I will share some of these titles in a future blog.

However, books for younger readers, like ‘Want to Play Trucks’ and ‘I Am Bat’ include nuances of understanding applicable to readers of ALL ages. They offer as many questions as they do answers. They are critical to building a reading for pleasure habit. We invite you to wander through our ever expanding picture book selection.