‘The Wolf Wilder’ by Katherine Rundell

Katherine Rundell visited the school in which I worked shortly after her first book, ‘Rooftoppers’ was published. It was a sensation, as was she. Young, educated, articulate and convincing- she had her audience compelled by her energy and ambition.

The book deserved its acclaim. It was something fresh, daring and different. Yet despite being in that audience, loving her debut and her delivery, I felt reluctant to dive into her magic anew with her latest title, ‘The Wolf Wilder.’ I thought, ‘Can she really be that good?’

Yes, reader, she can. I think what Katherine Rundell can do, which is so rare for any author, whether writing for children or adults, is create something different every time. ‘The Wolf Wilder’ is unlike anything I have read. There is a ‘sniff’ of Philip Pullman’s Lyra, but Feo, Rundell’s main character, is unschooled, unsophisticated, almost fauve-savant.

The story is set in pre-revolutionary Russia. The setting is used to explain and exacerbate the turmoil bubbling from St Petersburg to the rural communities that threaten Feo’s way of life.

I loved the characters, full of impulsivity, passion and rage, the wintry backdrop, the history and zoology. I loved the way there is no compromise in the story’s delivery. We learn the harsh realities of poverty, cold, cruelty and superstition. We bear the full brunt of Feo’s and Ilya’s harsh location and lives.

’The Wolf Wilder’ is a triumph. This one, dear Jake, is in your birthday parcel. https://bookwagon.co.uk/product/the-wolf-wilder/ 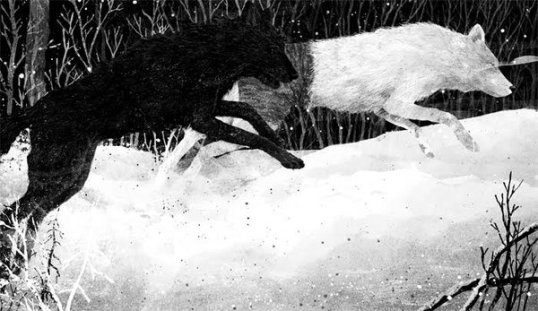