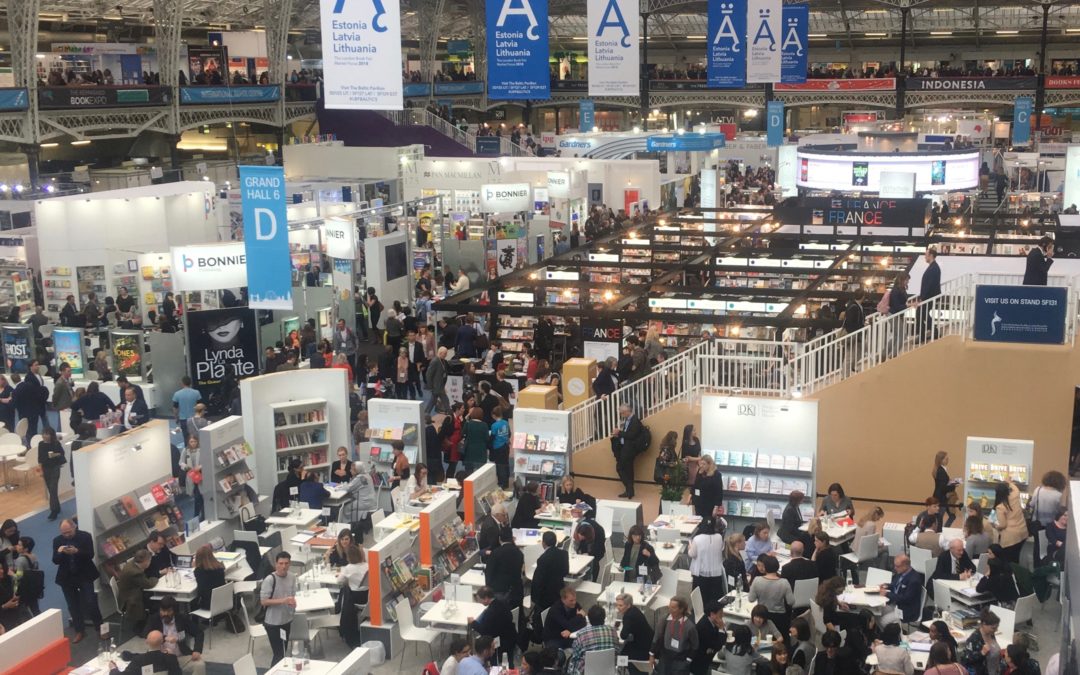 The Bookwagon rolls into the London Book Fair

This week the Bookwagon team has been at the London Book Fair at Olympia. The UK book trade’s annual showpiece has over 20,000 visitors and delegates from around the world. We attended last year, but were somewhat overwhelmed by the experience.  The sheer size of the event was daunting and as a consequence we spent far too much time drinking over-priced coffee!

At the LBF, huge deals are struck for the rights to new titles by very famous and new authors alike.  At least, that’s what attracts the interest of the news media. In reality, publishers setting out their wares for the coming year is the main business of the fair.  There is also a large number of overseas buyers seeking to broker rights and supply deals for their territories. This year, the whole shebang was sponsored by a market focus on the book scene in the Baltic countries Baltic Market Focus, whereas last year it was the Polish book market.

With our commitment in mind to only feature on the Bookwagon site books that we have read and love we had a plan of action. Because of this, we wanted to secure early notice of new titles from the widest range of publishers and from suppliers.

Bookwagon has come a long way since last year’s LBF when we had not even opened for business.  Now we have over 550 titles available in our shop.  It was reinforced that we are the only, exclusively on-line independent children’s bookshop in the UK. We’re feeling increasingly more encouraged. Many of our best-selling titles we first encountered at last year’s fair. They include: 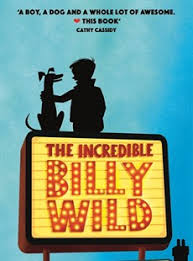 I Don’t Believe it Archie by Andrew Norriss 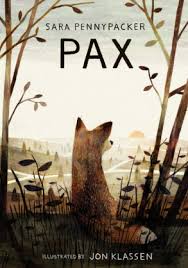 This is one of the most popular sessions at the fair.  A ticket-only event, it’s the opportunity for the leading publishers to preview their new releases over the coming months.  Some of the most exciting new titles announced were by authors that have become Bookwagon favourites.

There will be much anticipation for Katherine Rundell’s new novel ‘Into the Jungle’, her follow-up to the wildly successful and Costa-winning The Explorer. This time Katherine will be telling new stories from Rudyard Kipling’s ‘The Jungle Book’, and it is to be published in September.

Another title we eagerly await is the lovely Emma Carroll’s ‘Secrets of the Sun King’.  Emma gave us a sneak preview of her new book when we had the joy of working with her on a school visit in February. Her earlier books have become Bookwagon top sellers too, especially Letters from the Lighthouse and Sky Chasers. Emma’s new novel is about the discovery that King Tutankhamen’s heart was missing when his tomb was opened and will be released in July.

Susin’s new novel for young adults ‘No Fixed Address’ deals with homelessness and is due for release in October. We discovered this UK award-winning Canadian author last year and all her titles have been popular with our readers.  Her last release, ‘Optimists Die First’ being a top seller. But most importantly, Susin is one of Mrs Bookwagon’s Twitter buddies.

Readers familiar with Patrick Ness’s classic ‘A Monster Calls’ will be delighted to learn his new novel ‘And the Ocean is Our Sky’, a re-telling of ‘Moby Dick’, will be published in September.

Former Children’s Laureate Chris Riddell has obviously been very busy.  His ‘Goth Girl’ series is outstanding for readers of all ages (even mine).  New publications ‘All The Things Inbetween’ and ‘Once Upon A Wild Wood’ come out in the Autumn.

The Breadwinner by Deborah Ellis has become a modern classic. Following on from an excellent animated film version of the book, a graphic novel edition will be published in June.

Despite hob-bobbing with the book trade set this week, the Bookwagon team have still had time to find new and interesting books that we love.  We hope you too will love the following new titles.

Clara longs for escape from her prison of privilege and mourning. Parsefall and Lizzie Rose dream of full bellies and safe sleep. Little do they realise how their fate lies in the schemes of embittered witch Cassandra and evil puppet master Grisini – and a bewitching ‘Fire Spell’.

The Children of Willesden Lane by Mona Golabek and Lee Cohen

A superb memoir of courage and survival about a girl piano prodigy who flees the Nazis and arrives in Willesden, in a London plagued by the Blitz. This is a compelling tribute to a special young woman that will both educate and inspire young readers.

’My Brigadista Year’ by Katherine Paterson 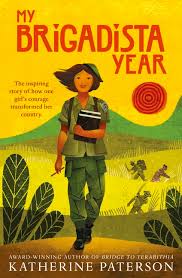 Lora’s grandmother understands Lora’s need to participate in Fidel Castro’s reading scheme. It is 1961 and Baptista’s puppet government is at war with Castro’s rebel forces. Fidel Castro’s initiative to educate rural communities is a key to his fight against American-backed forces. However, this plan involves transplanting school students, like Lora, to remote and dangerous areas. We join Lora in ‘My Brigadista Year.’

The Rhythm of the Rain by Grahame Baker-Smith

Isaac feels the spots of rain on his cheek as he plays by the mountain pool. He watches the water stream from his little jar and contemplates it journey, from rain to river, ocean to steam to mountain…. Join an engrossing journey, through ‘The Rhythm of the Rain’, with absolutely beautiful illustrations throughout. 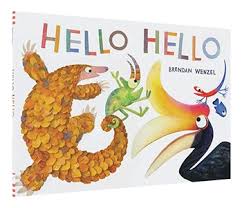 ‘Hello Stripes, Hello Spots, Hello Giant, Hello Not’…. This masterpiece picture book celebrates rare and endangered species. We greet a series of intricately created textured, toned warm animals – ‘Hello Hello’. Brendan Wenzel is rare and wonderful. In this page picture-perfect title he demonstrates his vision and skill anew.  A very worthy successor to ‘They All Saw A Cat’.

Jack’s experienced in applying the Sherlock code to new situations. Moving six times has meant he’s had to evolve a way of coping so that he can fit in unobtrusively. What happens when there’s someone determined to find the boy beneath, the one who’s ‘Just Jack’?

Finally, we have been working hard to crowd-fund the provision of a copy of ‘The Lost Words’ into every primary school in Hertfordshire. This magisterial book by Robert MacFarlane and Jackie Morris has caught the imagination and its importance cannot be underestimated.  The Scottish government has agreed to finance placing a copy of the book into every primary school north of the border. Many enterprising independent bookshops have been involved with their local schools to secure the book in public and school libraries.  We are working to do the same in our home county, with full support of ‘The Lost Words’ writers. Suggestions and feedback on this project are very welcome!