It is really interesting to learn about the backgrounds and motivations of writers and illustrators. I became more aware of Jarvis when I looked over his most recent title, ‘Mrs Mole I’m Home!’ (Walker) and was prompted to share it, for it made me laugh so much. 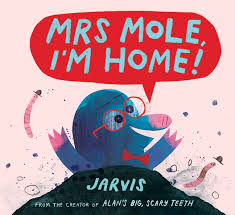 Jarvis is Peter Jarvis, one time bingo caller, bouncy castle painter, record sleeve designer and animation director. He appeared at this year’s Barnes Literature Festival, where he delighted his audience with stories and nonsense.. 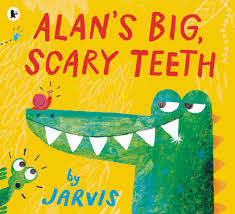 Jarvis received acclaim for his debut picture book, ‘Lazy Dave’ (Harper Collins), overdue a paperback print run. His second book, the hilarious, ‘Alan’s Big Scary Teeth’ (Walker) https://bookwagon.co.uk/product/alans-big-scary-teeth/ was part of the 2016 BookStart pack, offered to all preschoolers aged 3-4. It drew the attention of the V & A illustration awards’ committee resulting in Jarvis being one of three picture book makers in the shortlist to win this prestigious award in 2017. Other nominees were Benji Davis for ‘Storm Whale in Winter’ (Simon and Schuster) and Ana and Elena Balbusso for ‘Twelfth Night’ (The Folio Society). Previous winners of the V & A illustration award that recognises the very best in picture book illustration, include Laura Carlin https://bookwagon.co.uk/product/a-world-of-your-own/, Sara Fanelli, Posy Simmonds and Sir Quentin Blake.

Like  many creative people, Jarvis has taken a route of discovery toward his picture book making that has included varying experiences and people and developed his curiosity and vision.  Initially, he undertook illustrations for writers such as Jeanne Willis, https://bookwagon.co.uk/product/sticky-ends/, before creating his own picture books.

Jarvis says that he aims to ‘bring a person touch to his books.’ He wants to ‘see what his books can do, including being kept and loved as little treasures’. His aims are evident in what he creates, for they are quality, memorable picture books that ignite a reader’s emotions. Jarvis doesn’t repeat what has gone before, or look for a safe option, but makes something new, that he enjoys and wants to share with his reader. Bookwagon is pleased to stock titles by Jarvis, and looks forward to sharing more of his wonderful picture books in the future. https://bookwagon.co.uk/product/mrs-mole-im-home/

Newsflash!:- Jarvis is the 2017 winner of the V & A Book Illustrator of the year! https://www.vam.ac.uk/b/villa-2017/book-illustration